If you have kids, they’ve likely gone through a magic phase. My daughters, ages three and five, are in one right now. They run around the house waving whatever was closest to them when inspiration hit—dress-up wand, marker, chopstick, Barbie leg—shouting “Magic, magic, turn me into a _______!”

This is where their dad and I really get to have some fun. While both of my kids generally speak well and have quite a vocabulary for their ages, they don’t necessarily enunciate well when they’re excited or in play mode. So when our three-year-old shouts out something garbled like, “Magic, magic, turn me into a strlake!” we come back with, “Why would you want to turn into a skate!?” even though we know she meant snake.

It’s a fun game the kids could play for hours.

Why are we talking about kids pretending they can do magic?

I’m an introvert, so I spend a lot of time in my head. And because I struggle with anxiety and other effects of complex trauma, I tend to overanalyze and read into things a bit more than strictly necessary, while the INFJ in me picks up on connections and patterns. So, one evening while the kids were running around playing their magic game as I cooked dinner in the kitchen, I started thinking about how easy their version of magic was. There were no complicated spells to learn or obscure ingredients to stir into a cauldron or anything like that. Simply, “Magic, magic,” and then whatever it was you wanted to do.

I thought, Wow, that’s so easy. What if life was that easy? What if I could just “magic” away some of those things about myself that cause me a lot of heartache? Like being so sensitive to what other people might think about me?

But then I remembered I’d actually already tried that once.

When I was a teen, I was far from having learned to love myself. I struggled with carrying around the trauma from my early childhood, my rape from my early teen years, the demeaning and in some ways abusive relationships I clung to in desperation to feel loved in some way. I held it all close, ashamed of everything I felt.

But—as these things inevitably do at some point—it all came to a head.

I’d been in a series of relationships with guys who had absolutely no understanding of the concept of being honest or faithful. I’m not exaggerating when I say “no concept,” either; the boyfriend I broke up with the summer I turned sixteen (a breakup that was especially painful since he had also been one of my closest friends since before we dated) had admitted to paying his friends to hide his newly-found alcohol and drug habit from me, had bruised my wrists by jerking me around during one argument, punched the wall next to my face during another, and confessed to having sex with thirteen other girls while we were dating.

Let that all sink in for a minute.

Everything else aside, what self-confidence I had was almost completely devastated. While what he had done was beyond outrageous, he certainly wasn’t even the first guy to cheat on me or in some other way make it apparent that I didn’t even have basic worth as a human being to them. I initially blamed myself, of course, thinking if I’d been a better girlfriend in some way, he wouldn’t have been driven to cheat on me or start getting violent with me.

And because we’d been friends before we started dating, I had an especially hard time turning my back on him; though we’d officially broken up, we still talked, and I even agreed to go to watch him perform in a concert a few weeks later. See, my ex played guitar and was the lead singer and songwriter in a ska band.

I arrived and a few songs in, my ex strummed a familiar chord and I knew what song he was going to play. My heart soared. For a moment, I thought this was going to be his way of apologizing; after all, he was going to play the song he’d written for me for Valentine’s Day the previous year. He started to speak, talking about how he’d written this song for the love of his life, the same dedication he gave every time he performed the song and I started shaking, my stomach filling with butterflies.

He made a mistake—a lot of them—but he really loved me after all.

And then, instead of my name, he said the name of the last girl he’d cheated on me with and my world came crashing down around me. Familiar faces who’d heard the song before turned toward me and looked at me with a mixture of confusion and pity as my vision narrowed. I ran outside, threw up, cried uncontrollably, and then started chain-smoking the cigarettes hidden in my purse until I’d calmed down enough to drive.

That entire experience with that boyfriend finished setting the stage. When I found out the next guy I was dating had sex with my best friend’s little sister, it was the last straw for my sanity. I vowed to myself that I would never allow someone to hurt me like that again. I promised myself that I’d never again let someone use me the way they had.

Fool me the way they had.

Destroy me the way they had.

I had a tendency to shy away from thinking about the past at all costs, but I thought back to all the people who had hurt me since I was a young child and so many of them were males. Kids, teens, adults—but so many of them males.

So, to protect myself—to keep myself from getting hurt—I went on a rampage of hatred towards males.

For a while, I was nicknamed Castration Queen by my peers because I drew pictures of ripping off penises, I talked about Lorena Bobbit being my hero, and I verbally attacked just about any guy who dared talk to me. In my mind, they were all the same; they all only saw me for the sexual satisfaction I could provide to them and at the time, it made sense to me that it all came down to the penis between their legs.

Get rid of that, and the problem would go away.

I even fantasized about finding a guy who had been castrated, believing that was the only way I would ever actually be happy.

Waterproofing is an art.

I thought back on this experience as I cooked dinner for my family, fighting against the feeling of shame and embarrassment the unwelcome memory brought with it. And then my youngest daughter shouted, “Magic, magic, turn me into a drwuck!” and I realized something I hadn’t had the perspective to earlier.

My Castration Queen phase was an overreaction to the things that had happened to me—without a doubt—but it wasn’t the decision to protect my heart that had been the problem. It was that I’d made it an all-or-nothing scenario.

Either I felt everything, or I felt nothing.

I wanted a way to let things roll off my back—to waterproof myself, if you will—but went too far because it’s not as simple as just deciding to be different. Basically, I did my own version of my children’s magic, magic spell, and instead of turning myself into something gentle like a duck, I’d managed to morph myself into a polar bear.

As I sautéed the vegetables I’d just chopped, I realized it’s more akin to the experience when I waterproofed a pair of canvas boots last year. I had to first heat the wax and the material to the right temperature, so the wax was soft, but not too soft. Then I had to rub the wax onto the material and—while it was still warm—use my fingers to work it in. If the wax went on too thick, there were unsightly white clumps of it that looked like some large bizarre dandruff once it hardened and the material didn’t breathe at all. If I didn’t use enough or didn’t work it in well enough, water would get through the material. It took several iterations before I managed to get it even close to right. Truly, it’s an art unto itself.

And the same can be said for ourselves. Sometimes we need to filter out what we let in, to keep out those things that have the power to destroy us. We don’t want to go too far, though, and keep any feelings from getting in and reaching our core, becoming a version of the Castration Queen.

But this isn’t easy, like my kids’ magic, magic spell. It takes practice and both a willingness and ability to realize when you’ve misstepped.

Because there is most definitely an art to this waterproofing.

Katherine Turner is an award-winning author, editor, and a life-long reader and writer. She grew up in foster care from the age of eight and is passionate about improving the world through literature, empathy, and understanding. In addition to writing books, Katherine blogs about mental health, trauma, and ways we can be more compassionate as a society on her website www.kturnerwrites.com. Sign up for her newsletter to stay up to date and get a free copy of her book moments of extraordinary courage.

3 thoughts on “The Art of Waterproofing” 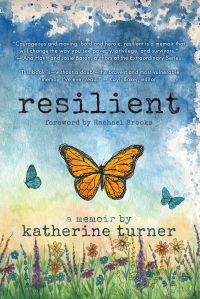